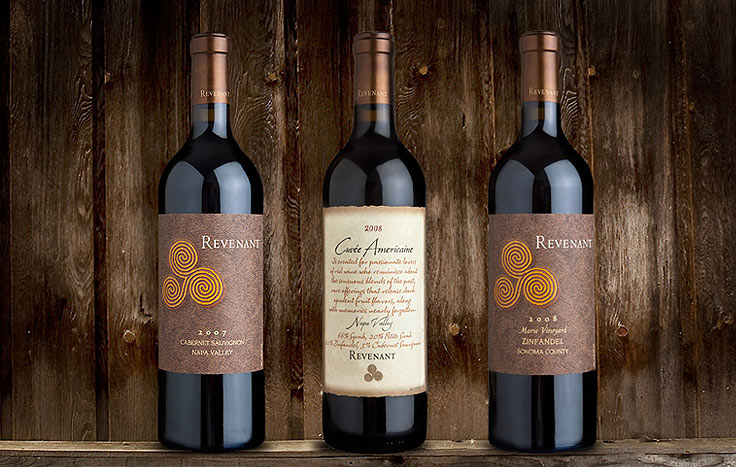 Revenant Winery is located in the Calistoga AVA of the Napa Valley. In 2005 proprietor and winemaker, Anthony Knox, released Revenant’s first vintages including a Cabernet Sauvignon and Rosé of Malbec. A vast majority of Revenant’s grapes come from Frediani Vineyards in the Calistoga AVA. A minimal amount of the Syrah, Cabernet Sauvignon, Cabernet Franc, and Merlot grapes come from the Silverado Trails vineyard in the Stag’s Leap AVA. Producing under 1,000 cases yearly, Revenant strives to perfect the boundless expression of the winemaker’s art, while liberating the individual and a

Revenant Winery is located in the Calistoga AVA of the Napa Valley. In 2005 proprietor and winemaker, Anthony Knox, released Revenant’s first vintages including a Cabernet Sauvignon and Malbec Rosé. A vast majority of Revenant’s grapes come from Frediani Vineyards in the Calistoga AVA. Producing under 1,000 cases yearly, Revenant strives to perfect the boundless expression of the winemaker’s art, while liberating the individual and abundant promise in each and every taste.

The name “Revenant” is derived from the French term Revenir, meaning “to return.” Knox was introduced to the book “Al Reverant” by a friend one summer evening. This tale takes place during Napoleonic war times and is about a young French officer and his beautiful wife, who was coveted by her husband’s General. The General sent the officer away where he was later killed. The officer returns as a spiritual entity, the revenant, to protect his wife from the evil General. This story resonated with Knox because at that time he was laying low, getting ready for the next phase of his career and he felt it was an appropriate name to represent his wines.

The triskele symbol is used to represent Revenant, it is composed of three interlocking spirals and comes from an ancient Celtic emblem representing the cycles of life. The three spirals all connected has a double meaning on a farm, each circle represents the three elements needed for grape growing, Earth, Sky (Sun), and water. In a spiritual element as found on a Holy site, the three spirals stand for birth, rebirth and the afterlife (or reincarnation). For Knox, the cyclical feel, along with the references to natural forces, certainly applied to the growing of grapes and the crafting of wines he creates.

The true inspiration behind Revenant is through the people Knox met on his journey to winemaking. He was fortunate to work in Italy, where he was influenced by friends and colleagues including Antonio Zaccheo (both Senior and Junior) of Carpineto, Grandi Vini di Toscana. He especially treasured his meeting with Guiseppe Quintarelli, regarded as Veneto’s finest winemaker. Knox is eminently grateful for an enduring bond with his mentor of eight years, Dr. Terri Leighton of Kalin Cellars. Leighton was the head of microbiology at UC Berkley and was renowned for his malolactic bacteria and yeast use. Much of Revenant’s fermentation styles and nature of wine making has been learned from Dr. Leighton’s knowledgeable, playbook.

Stylistically, Knox does not use filtration in his wines. The only fining agent used in Revenant’s wines are two egg whites per barrel, the old-fashioned way. Knox is a minimalist in manipulating wines and works to express the truest characteristics of each varietal used and is not afraid of acidity in red wines. He feels that it gives the wine better age-ability, which is necessary in Revenant’s wines that spend extended time in the barrel and bottle aging. Each barrel is selected for their influence on the Revenant Bordeaux varietals. Some accentuate fruit components as others bring forth the power of Cabernet Sauvignon. The grapes are always handpicked early in the morning to maintain the delicate flavors, sorted, crushed and pressed.

Revenant’s core selection consists of three primary wines; an Un Petit Franc that is very expressive of the fruit, a Cabernet Sauvignon with striking dark colors that make this wine visually brilliant, and the proprietary red named “The Decker”. The Decker is Merlot dominant and has a history of being immensely popular. When crafting each vintage of the Decker, one barrel is used to create power and bring out the raw immature animal that young Cabernet Sauvignon is. This beautiful blend creates a harmonious wine and brings out all of the great aspects of each varietal. The term “Decker” came about when Knox used an anagram on his middle name, Dereck. His mother always loved that name, so he felt it was a tribute to her.

Revenant’s Winery is currently closed to visitors due to the state of Covid-19 but will be available by phone appointment in the future.

Revenant Winery is located in the Calistoga AVA of the Napa Valley. In 2005 proprietor and winemaker

Representing small Estate wineries like Balletto is precisely what we specialize in doing. While w